Communication on the causes of air accidents to victims’ families has not advanced at the same rate as international civil aviation in the world. On the one hand, it seems the investigative authorities are distrustful toward the families of the victims; when they explain the causes of the disaster, the information has previously been leaked to the media. This practice is not provided for by Article 21 of Regulation (EU) 996/2010. But on the other hand, the authority provides information to society through the media, which is usually interesting information depending on the source from which it comes.
In the last 15 years, despite the seriousness of the air accidents that have occurred around the world, and both because of the way they happened and because of a large number of victims, information in the media and social networks has focused on photos, videos and audios of people in a state of shock; images of defenceless corpses or of their personal belongings scattered where the plane crashed.

A passenger becomes a victim when they do not arrive at their destination. In general, their families face a wall of misunderstanding and lies, despite the agents involved in air transport assuring a dose of compassion. They seek to control the consequences so everything can be closed as soon as possible, without thinking that the least a person who has lost a loved one in a plane crash needs to know is why he or she died, because there is no greater suffering than loss.

As is natural, the information provided after an air accident is not the same in all States or authorities. Many factors must be considered: structures with preventive aviation safety cultures, advanced societies with computerized mechanisms, considerations regarding culture or religion, etc. Those States with solid democratic, moral and cultural principles usually put people first, although always with reservations due to the “security of the systems”. The diverse and multiple interests generated around an air disaster, with passengers from different nationalities, aircraft manufacturers, civil aviation authorities and places of occurrence, are issues that could be considered take precedence over the suffering of the people affected.

According to my experience of the accident of 20 August 2008 (Madrid-Barajas Airport, Spanair flight JK5022 crashed during take-off, causing 154 deaths and injuries to 18 survivors), everything had to be done despite the great air tragedies suffered in Spain, including the largest worldwide number of victims of air catastrophe at Los Rodeos Airport – Tenerife in 1977. Knowledge had to be extracted for everyone’s safety. In this sense, thanks to the pressure of the Association of Affected by Flight JK5022, an assistance plan for victims and their families has been developed, in addition to other regulations regarding the disastrous situations the families suffered in 2008.

Affected by Flight JK5022, in 2015 in Madrid I promoted the creation of the Air Crash Victims’ Families’ Federation International (ACVFFI), recognised for the first time in ICAO history as an international organisation suitable to be invited to its events. The Federation is made up of ten victims’ associations from different air accidents, as well as of more than 30 victims who do not have an association. The purpose of ACVFFI is to be the unique voice for victims in international forums where the issues related to international civil aviation regulations are decided, which until then had “forgotten” the air accidents’ victims and families, taking into account the historic advances at the international level achieved in the last ten years.

It is deeply hurtful for anyone who has lost a loved one in a plane crash to see the images, over and over again, of scattered belongings or dead bodies. Is that information? What value does it bring, except pain for families?

Since 2010, I have reiterated to the authorities of my country, ICAO and international organisations the urgent need to create a guide or model for all media and agents involved in air transport. This is already urgent because it is repetitive and offensive to constantly see images that do not inform but only fill minutes of television, radio and press without thinking about the damage they do to the families and victims who, despite being “protagonists” of the news, are not taken into account to avoid additional suffering.

The ICAO Policy on Assistance to Aircraft Accident Victims and their Families, Doc 9998, indicates some aspects regarding the provision of information, but without developing.

As ACVFFI’s chairperson, I have presented six working papers at three ICAO Assemblies related to important issues for victims and their families. Two international conferences held parallel sessions on assistance to victims and their families. Little by little, a favourable climate has developed in States, which faces the “dark side” of aviation: the victims, who, as passengers, are the basis of civil aviation development. I discovered great ignorance regarding the consequences for the victims in the majority of States that had not suffered accidents. It was therefore necessary to meet all, or the maximum number of, civil aviation agents, to show the tragic face of aviation: the victims.

This is how we managed to include the first international Symposium on Assistance to Aircraft Accident Victims and their Families in the 2019-2021 ICAO triennial calendar of events. It was held in Las Palmas de Gran Canaria on 1, 2 and 3 December 2021, with the support of the regional government of the Canary Islands, the origin of more than 80 deceased in the accident of flight JK5022. One panel looked at the treatment of information, with contributions from authorities, media, university professors and international organisations. Other important issues were addressed, such as the upgrade of Recommended Practice 8.46 of Annex 9 to a Standard, because very few States have implemented Doc 9998, the independence of the accident investigation authorities, and the best practices of insurers in compensation, among others. I participated in two panels on behalf of ACVFFI; it was the first time ICAO had dedicated an international event to specifically address the issues surrounding a passenger becoming a victim and I am hopeful there will be other similar events in the future.

It was shocking to observe that participants had different opinions on concepts such as freedom of expression, the training of informants, the difficulty of obtaining official information, the impact of social networks and the speed of dissemination of unverified information. I describe it as shocking because, with a few exceptions, the point of view of the victims’ families is hardly taken into account.

A kind of consensus was reached for ICAO to prepare a guide, method or manual that collects some points to take into account so that all the information provided during the chaos after an air accident is first verified and transmitted with respect and dignity towards the deceased and their families, leaving out any type of uncertain, disrespectful and unqualified information. The speed in offering a piece of news should not prevail over its content.

In the conclusions panel, I spoke about the model of Radio Televisión Canaria reporting on the eruption of the Cumbre Vieja Volcano on the island of La Palma. It followed the instructions of the Committee of Experts formed after the emergency, caused by nature. Without nuances of interpretation on one side or another, the pain of the people who had lost all their heritage and the material memories of their lives prevailed.

Is there a model to follow in any country in the world? From my point of view NO. Are there experiences that are references? My answer is YES. Not all air accidents in the last 15 years had the same treatment. Some countries have cared for their citizens, have accompanied them on the difficult path after the death of their loved ones until the end of the duel. Not all models are perfect, but it is possible to extract one part and create a common model respected by the agents involved, airlines, airports, international organisations, the media, aircraft manufacturers, insurers and authorities.

Regarding the treatment of information, could ECAC create a compendium of best practices in Europe, which could be introduced at ICAO, even at its next Assembly, to support and contribute to this objective?

In 2018 we achieved that the Spanish Congress of Deputies approved a Proposal Not of Law, which among other matters asked the European Union to establish a statute of the victims of air accidents and families, which would address the outstanding issues: knowing the causes of the death of their relatives, knowing the truth, correcting the failures that caused the tragedy, ensuring a balance between insurers and victims and repairing the damage caused in accordance with European and international regulations rather than with the internal regulations of each country (for example, in Spain the scale established for compensating the injured in a car traffic accident was used for the victims of the JK5022 plane crash, as strange as it may seem), guaranteeing the independence of the accident investigation authority, ensuring the judicial investigation on the responsibility for the deaths and injuries of people is conducted with rigour, means and independence, avoiding interference between the safety investigation and the judicial investigation because their objectives are opposite: the first aims to discover the causes of the accident and the second to discover the responsibilities.

Could ECAC lead the elaboration of a European statute of assistance to air accident victims and their families in the European Parliament?

ICAO has already paved the way; Europe still has to elaborate such a European statute to address the issues outlined here.

The provision of information to families and society must fulfil the function of informing while remaining compatible with respect for the rights of citizens affected by an air disaster.

I invite ECAC to work together with ACVFFI and I would like to indicate our availability. We have done so loyally at ICAO, achieving significant and historical advances such as 20 February, when the International Day of Air Crash Victims and their Families was commemorated for the first time in 2022 to continue in future years.

For all the civil aviation victims in the world who are ALWAYS IN OUR HEARTS. 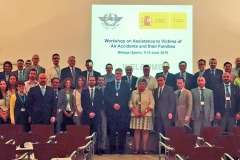