Air accidents exist ever since air transport started. In fact, they were the base for improving safety, learning about their causes.

Usually, associations of families of victims set up as a result of major commercial aviation accidents. ACVFFI began with the effort of several families of air accident victims in order to improve the assistance and trying that anyone no experience again what they did live.

On September 1, 1983, a commercial Boeing 747 bound from New York to Seoul, South Korea. Korean Air Lines Flight, KAL 007 was shot down near Sakhalin Island, off the coast of Siberia, after straying accidentally into Soviet air space. All 269 people aboard were killed. The Soviet Union long maintained that the flight was a spy plane sent by the United States, and the attack endures in public memory as one of the last, bitterest engagements of the cold war.

Hans Ephraimson told The Los Angeles Times in 2000; “No one looked after our families. We decided it would be a good idea if we looked after families in other crashes.”
Mr. Ephraimson-Abt lost his daughter on such air disaster. Since this date, he became an internationally known advocate for families of air-crash victims. He created ACVFG (Air Crash Victims Family Group) which chaired. ACVFG was invited to attend relevant meetings of ICAO (International Civil Aviation Organization), such as High-Level Safety Conferences and General Assemblies, as an “observer”. One of the major achievement was the revision of ICAO Circular 285.

During its 32nd Session in October 1998, the ICAO Assembly considered the subject of assistance to aircraft accident victims and their families. Following a discussion, the Assembly adopted Resolution A32-7, Harmonization of the regulations and programmes for dealing with assistance to victims of aviation accidents and their families. It has noted that family members of victims, irrespective of where the accident occurs or the national origin of the victims, express certain fundamental human needs and emotions. Among other important aspects, such Resolution urged the Council to develop material which could include Standards and Recommended Practices, citing the need for the establishment of regulations and programmes by Contracting States and their air carriers to support victims of civil aviation accidents and their family members.

Therefore, in 2001 ICAO issued the Guidance on Assistance to Aircraft Accident Victims and their Families, Circurlar 285, did should enable States to prepare a plan for the provision of family assistance in the event of an aircraft accident. In 2005, provisions were included in Annex 9 — Facilitation to enable expeditious entry into the State in which the accident occurred of family members of the victims of an accident.

In 2010 the ACVFG encouraged the creation of the Assistance to Aircraft Accident Victims Policy Task Force (AVPTF). It was formed by several organizations: Authorities of Air Accident Investigations, NTSB, Director of ICAO Air Navigation Bureau, IATA, IFALPA and ACVFG which represented victims.

During 195th Session on 16 March 2012, the ICAO Council agreed that a new ICAO policy document should be developed for the provision of assistance to aircraft accident victims and their families. Secretary General directed to such AVPTF in order to develop policy document.

Accordingly, the ICAO Policy on Assistance to Aircraft Accident Victims and their Families (Doc 9998) was approved by the Council on 1 March 2013. The ACVFG’s Delegate Chief, Pilar Vera, President of AVJK5022 (Association of Affected of Flight JK5022, from Spain) attended in order to get support of Council members.

Hence, during 38th ICAO General Assembly, the Working Paper 022, presented by Council and Doc 9998 was ratify.

This was the last time that Hans Ephraimson can attend, he passed away 18th October 2013. ACVFFI was created in his memory. Next image is an historical picture for Families Assistance: 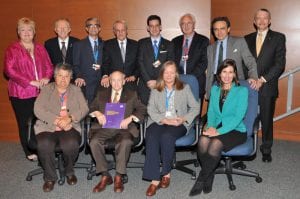 On the occasion of the ICAO High-Level Safety Conference, HLSC 2015, Provisional Chairwoman of the ACVFG, Pilar Vera Palmés, was invited to intervene. She participating in the Side Event Current Initiatives to Assist Accident Victims and their Families. She urged the international aviation community to allow the voices of victims and families to be heard in the major events of the ICAO and other international bodies. She announced that victims and families wished to create an umbrella organization and they would invite other associations of victims and families from any place where has been an air disaster to join them. That was the basis of the creation of ACVFFI. Whether you wish to read the complete speech, please, click on the following link Speech by the Provisional Chairman of ACVFG (Air Crash Victims Family Group).

The world has changed radically since the 1944 Chicago Convention, but the aviation sector has not changed its treatment of the victims. Protection of victims’ rights should be compatible with the sustainable development of aviation and with the moral imperative that has thus far been absent from the discussions among air transport stakeholders: economic progress is all well and good, but we must not forget that planes carry persons, human beings.Pilar Vera

Finally, certain associations of families’ victims which wished to have a greater presence in the meetings of the ICAO in order to cooperate and be able to influence States in the international development of policies and regulations on assistance to victims of commercial aviation accidents founded ACVFFI in 21st July 2015. The Founders were convinced that they must speak with a single voice, and that the larger the group and the wider the geographical representation of victims from different countries. The greater will be the influence of the family associations in their dialogue with the ICAO, among other international bodies.